The Bowen technique is a dynamic system of muscle and connective tissue therapy that is revolutionizing health care worldwide! For more than 40 years it has been used successfully to treat thousands of people suffering from a variety of illnesses. Developed by the late Tom Bowen in Geelong, Australia, it is a unique system that amazes therapists of all disciplines. It is often referred to as the “homeopathy of bodywork”, as it utilizes small and measured inputs into the body which stimulate the body to heal itself, often profoundly. The gentle moves on soft tissue stimulate physiological changes and energy flow, empowering the body’s own resources to heal its’ self. The Bowen technique is safe to use on anyone from neonates to the aged and produces lasting relief from pain or discomfort. Orthodox and alternative therapists have been generous in their praise of this technique.

The Bowen technique balances the body to allow it to heal itself. The work consists of a series of precise moves on specific points of the body. These moves are light and can be done through clothing. There are frequent and important pauses between each series of moves giving the body time to benefit from each. A Bowen move is itself, a study in delicacy. The structure (muscle, tendon, or nerve sheath) is identified with the thumb or the fingers, the skin slack is gently tractioned in the opposite direction to the intended move. Finally the skin is allowed to move across the structure to the limit of the available skin slack.

Although individual moves used alone may produce a positive effect, the full benefit of a technique is gained through a complementary series of moves. Only a limited number of sequences are needed in each session so the technique is simple to do and easy on the patient. Therapy sessions are approximately 40-50 minutes in length and are scheduled at roughly seven day intervals. This allows the body time to integrate the work and rebalance its’ self to its’ new optimal state before continuing on. The Bowen technique allows the body to heal itself with minimal intervention in contrast to other hands-on disciplines where the therapist imposes the healing mechanism on the patient through the technique performed.

There are many theories about the physiological mechanisms by which the Bowen Technique brings about the results for which it is famous. In addition to the rebalancing of the ANS, described earlier, Bowtech moves and procedures may reset the body to heal itself by activating, through the nervous and endocrine systems among others, the following mechanisms: 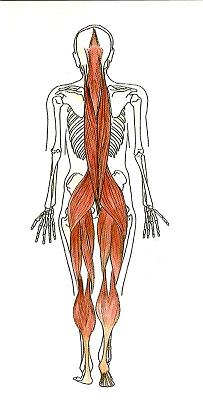 The continuity of muscles up the back and down the legs means that this relationship is given a lot of attention in Bowenwork sessions. Manipulation of these muscles can have a profound effect on the spine and posture.